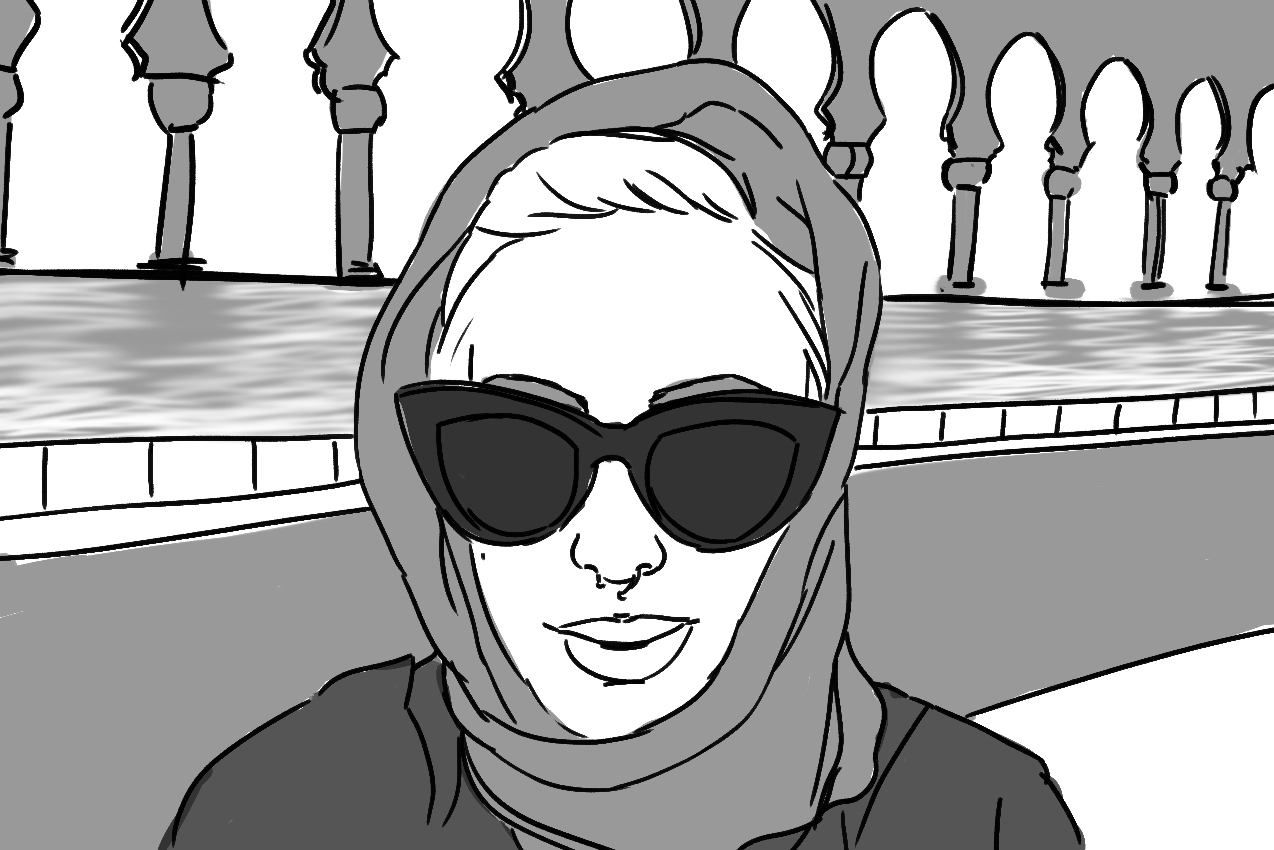 Ever fucked off somewhere after a break up? Over the next few weeks, I’m interviewing women who left their lives to adventure, well, anywhere.

Yep, leaving town can actually be good* for you after a break up – whether it’s a few days, a few months or a sea change that allows you to reinvent yourself – post-fucker.

Laura Spinney, the legend behind Rebl Society, is my first victim.

Rebl is an online community for bad ass women who want to connect, meet up and share stories about their solo travel adventures.

Laura started her epic blog and Insta page after a shitty break up that inspired her to ditch home for a holiday in ‘Nam.

Here’s what she said.

FOD: Have you ever been through a shitty break up? (Okay, sorry, is there any other kind?)

Laura: Have I? Haven’t we all? Ooft, my last break up was a doozy. I’ll shorten the complexities for you.

Met a guy one month out from moving to the Middle East.

We fell head over heels – at least, so I thought. I gave him the choice to stick with it or bounce, considering I was the one leaving. We decided to stick out the two-year contract I had signed.

One year in, he lost the fucking plot and gave me an ultimatum – come back or he leaves. The fucker made me fall for it and I was on my way back to save the day. Moving countries is stressful and expensive!

So, I was pretty broke, not sure what I wanted to do about my career – the impending Saturn return was coming my way and year 27 Earth side was coming in hot too.

Said boyfriend had a high paying job which came with an ego, an ex-wife (mid-divorce) and a child. Kill me! Three months in, he stopped saying I love you, stopped saying good night and basically ignored my existence.

Four months in, after investing my last monies into a business, he decided he didn’t want to try anymore. I was broke, homeless, single and torn between a business that never had a chance to lift off and getting money STAT.

Terrified is an understatement. That was the day I stopped trusting men.

Update: Laura is thriving and stronger than ever now.

FOD: What are your thoughts on fucking off to a new place after a break up? Have you ever done it?

Laura: My ultimate ‘cleanse’ is a trip away somewhere, as quick as possible. And, I move hell and high waters to make it happen.

Because I was in such financial ruin (refer above), the closest place I could get to was Tasmania for Dark MOFO. Not ideal as it was couple central.

But, I made the most of the down time, good food and comforting myself in my cosy BNB.

Then I saw a sale on flights. Anyone that knows me knows booking a flight mid-wine is my thing.

So, I booked a trip to Vietnam over NYE for three weeks and it cleansed my damn soul.

FOD: Tell me about Turkey?

Laura: Turkey was the first European country I touched down in. It still has a piece of my cold-blooded heart. It sounds scary, especially to a single female; but it’s not so bad once you’re there.

I travelled with a girlfriend of mine. We were 24ish and spent roughly three weeks there, and two in Greece. Prior to going we were told things like, ‘oh no, have you seen the news?’ and, ‘I think you should re-think this’. According to Smart Traveller we should have.

But fuck that shit!

My shitty ex and I were planning a trip to Europe, then one night he took me out for dinner, which was weird because we were young and poor and couldn’t really justify such luxuries.

But, he wanted to get me in public before he told me he had booked Europe with two other mates. Turkey ticked off a lot of firsts for me. My first European trip, my first FOD trip and my first one night stand 😉

Jokes aside, you have to stay aware and keep your wits about you in Turkey. People are very friendly, they offer you sweets outside sweets shops, tea in the markets and want to show you their rug shop – all of which can be textbook scams.

We visited Istanbul first, on the new side of town in Taksim and then the old, Sultanahmet. Beautiful, beautiful, beautiful. The mosques, The palace, the bazaar, the everything. It was like a sensory orgasm – I’m smiling as I type this.

We later travelled down south to Fethiye, a coastal sleepy town with an amazing hostel. We felt way more at ease here, especially being around after dark and drinking. We didn’t drink a drop the first time in Istanbul.

We then moved to Oludeniz – it was terrible, don’t go. It’s cheesy and sleazy. We stayed one night out of two and went back to Fethiye for our last night.

We parasailed and kayaked around this area and even hired a car. Fucking hilarious.

Marmaris was our next stop, also shit. Heavy tourism and mass amounts of Brits head there, which is fine but it’s a bit hectic.

Equal parts good food, loads of things to do, sights around, cute bars, restaurants on the sand or big bravado clubs, if you’re into it. I am not.

FOD: Where would be your ideal place to fuck off to?

Laura: I love Asia. It’s not for everyone but when a big speed hump hits your life, sometimes you want to get away quick.

Being Australian born (not a native), I’m lucky that it’s right at my door.

It’s cheap, diverse, not a huge time difference, yet gives you so much. Hands down, Vietnam is my fave Asian country so far.

FOD: What helps you when you’re dealing with a break up?

Laura: That’s a real tricky one. My last break up I started drinking a bottle of wine a night. This lasted only a few weeks because I was bloaty as hell.

Every time I come back to the same thing – exercise and trip planning. Hurting yourself in a productive way feels way better and contributes less to anxiety and depression.

I start running, weightlifting, HIIT or boxing. Boxing hurts my wrists so mostly weights and running. Anything to give me endorphins. In addition to that, reading and staying in.

I become a home body and sign up to free short courses online, it could be anything from brushing up on grammar to an entrepreneur course; anything to focus and pour my energy into.

My last break up I went pretty spiritual, I was really broken. I went to a silent retreat for ten days called Vipassana. This was 12 months after.

It helped slightly but it was more a step, not a cure. I would never do it again, but it taught me patience and resilience. And rage.

FOD: Do you have any advice for people going through that shit right now?

Laura: What helped me was sitting with the notion that nothing is permanent.

Once I knew it was over I dreaded the task of healing. I knew it was a bad one. I knew I was broken and had so much to do, I actually was dreading it.

It took a good 18 months for me to feel somewhat like myself and I remember thinking, how did I survive in public being this broken? I was a blurry mess.

Then one day, I jumped in the shower and had an epiphany – I was back, I was me again –  just like that, and I smiled.

I was so fucking proud of myself. So be patient with yourself. Be kind. Take your time, you want to come back 100% not 65%.

I’m a big believer in being alone. Rebound for connection but not for keeps. You have to protect your energy so no bueno on the partners for a little while.

Sit comfortable in your uncomfortableness, good things will come I promise.

FOD: What inspired you to start Rebl? When did it launch?

Rebl came shortly after my trip to Vietnam. I was hiking up the biggest mountain in Indo-China called Fansipan.

About half was up, we stopped for lunch and there were a few more people that were hiking, I ran into a girl I knew from my other career [hairdressing] at about 2,200 metres above sea level. Crazy!

Long story short we all met up in Hoi An a few days later. There was about six of us girls who met at Rosie’s cafe every day to hang out. We discussed what we wanted to do for the day and then split up for adventures.

The dynamic was incredible – we encouraged, protected and adored each other. Women from the UK, Canada, Germany and three from Sydney. Although we were autonomous mostly, we still appreciated what each brought to the greater group.

It was harmonious and magic and I thought, there must be women (or women identities) that want to travel but just can’t get on the plane or book the trip.

And so, the idea for Rebl was born.

FOD: Anything else on your mind?

Laura: As bad as break ups are, as broken as we get and as much as we think we will never return, I’m also thankful for them. My life is incredible, and I’ve since found a beautiful soul to be my partner.

I still travel solo because that’s who I am. He supports my ideas, my autonomy and me. I’m also an incredible feminist (I say incredible because extremist doesn’t quite have a ring to it) and I don’t tolerate people’s shit anymore.

Yes that comes with age but it also comes with lessons from all the bad shit. Without that I wouldn’t be me now. Silver lining!

Thank you, Sarah for all that you do and giving me this pleasure.

FOD: Thank you for being brave enough to share your story.

For more Laura head to Instagram, where she posts shit that makes you want to quite your job and book a trip somewhere other than where your ex lives.

Laura also has a blog, that is goddamn inspiring (and other synonyms for inspiring).

If you’ve ever fucked off somewhere after a breakup, I’d love to hear your story. Share it with FOD on Facebook or in the comments below. x

* If you like experts and science, some psychologist told the Independent.UK that fucking off after a break up is a good thing. She didn’t say it like that though.

Our Facebook page is shitty enough to be good.

Save $5 on any product when you use this discount code: YOURULE